what money is for …


some diamonds are rare, and you pay a pretty penny for them.


some diseases are rare, and they change your whole life.


so far, the pain of losing Bane has been worsened by the fact that there are no clear answers as to what caused him to get sick.


imagine your pediatrician saying the words to you: “in thirty years, i have never seen anything like this.”


some people would get real bitter real quick — at winning the tragedy lottery  in this way.


but not my friends.


you might not have known Sonya in fifth grade, when she had that unfortunate haircut and the same sassy attitude.


you might not have remembered them from seventh grade, when they first became best friends.


you might not have known Drason in twelfth grade, when he won so many senior class superlatives that they had to start giving them to the second place finishers.  most dependable.  friendliest.
best all-around.


you probably weren’t there just after college, when they stood on a hill in the small town they grew up in and promised to give their whole lives to each other, come what may.


but you’re here today — when “come what may” has come upon them in a hard, hard way.


has come upon them in the form of a problem the doctors couldn’t fix, a rare disease that their sweet babe didn’t survive.


i’m writing this today because i was there.  my fifth grade haircut was just as bad.  i passed a note from one to the other in seventh grade lunch.  i voted for Drason — in all categories.   i was the one in the blue dress, standing up front on the bride’s side.  and i hit my knees, there in that hospital, when the pain of loss seemed insurmountable.


so when my friend, less than a day after this loss, looked at me and said:


“i don’t want his life to have been about sadness.  i want to do something that will  make his life bring good to people, because i know that he would have brought good to people, just like his dad.”


well, you don’t recover from hearing that.  and if you’ve got any goodness in you at all, you do your darndest to make it happen.


this site is the attempt of myself — and a close circle of friends — to make it happen.


just today, we loaded a button on the left column of this blog.  that button is linked directly to an account at a local bank.  that account is to serve as a  start-up fund for a charity  that Sonya wants to begin in Bane’s name.  from her years working as a social worker, and from Drae’s years working with troubled teenagers, they have both built  hearts that are driven toward helping others.


now they will use their hearts and their gifts to give back … to honor the gift they were given in spending nine months with a precious, precious boy.


i’m no television evangelist, so i won’t try to tug and pull your heart strings, but i will say this:


there are times in life when we learn  what money is for.


and though it often has to be used for the mundane: the groceries, the gas, the diapers, the doctor bills that pile up — occasionally it also gets to be used for something amazing.


and though my dear friends are so wracked with grief right now that they haven’t written a mission statement for this charity, though we don’t have shnazzy t-shirts or celebrity endorsements, we do have the memory of this face: 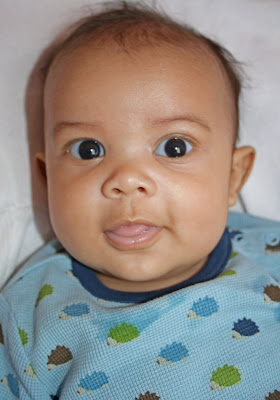 and the commitment that the light in those eyes will  touch others for good.


this is what money can do,if we let it.


because disease is real, and grief is real.  yet, people with strong faith and hearts bent toward giving back — people like Sonya and Drason —