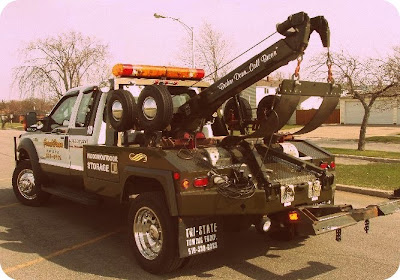 photo credit here
Turns out, even a preacher man  has a bad day, now and then.


And on a day such as this, one preacher man found himself stranded, his car on the side of the highway, silent and useless as a paperweight.


He set off on foot, hoofed it to a friend’s house, and because it was past the hour that businesses operated, he left the car until morning.


Next day, a Sunday, he chose a tow service randomly from the yellow pages and set up a time for his car to be rescued.


Only it turns out, the choice was anything but random, and the car wasn’t the only thing about to be rescued.


The tow truck driver’s name was Mike.  And Mike was late.


Not just five minutes late – an hour late.  When his truck finally came rumbling in, when it  hissed exhaustion and heaved to a stop, Mike fell out of the driver’s side door and rattled off five different excuses before his heavy boots hit the asphalt.


The preacher man’s jaw was set; his Sunday clothes hung heavy with sweat from the blazing afternoon sun, but he replied with  as much grace as he could muster,and by the time the two men sat side-by-side in the cab of the tow truck, the tension had eased.


Mike spoke his apologies again, peppering them with even more excuses, and capped off his rant with an emphatic declaration that today had been “the worst day of his life.”


With this, the preacher man felt something break within him, felt the tide of strained courtesy ebb, and a wash of conviction urge him to push past pleasantries and speak truth.


And then  it was spilling from him,  from his mind where it had been seared: the story of that little boy, wearing a bow tie like his daddy, who he had helped to bury just yesterday.  He told of two young parents, bereft of  one who had been long-awaited, long rocked and soothed, long prayed over.  Of a gathering of people who had wept long and raised hands high, in a ceremony where pain and praise commingled, where tears fell hot and carried deep sorrow tinged with hope’s faintest glimmer.


Mike didn’t stop him.  He listened, silent.  He kept his eyes on the road, his hands gripping the steering wheel so that his knuckles showed white.  He nodded now and then, and when the story was finished, he stammered out a few broken phrases, then gave up and turned to face his passenger.


“I want to know why,” he insisted, the words an accusation.  “Why does something like that happen to a little kid?”


His face was hard, but his voice cracked as he spoke.  He’d seen his share  of tragedy, he said.  Watched as a cousin was gunned down before his eyes.  Wept over the death of his own brother.  But each of these had carried reasons.  Each of these could be explained.


Now he looked to the preacher man, as if waiting for a bill to be paid.  An explanation he was owed.


“It’s not the why  that’s important.  It’s the what.  What happened to that boy when his breath was gone?  What kept his mama’s knees from buckling when they put him in the ground?  What gives his daddy the strength to go to work every morning since?”


But that’s not true, today.


Because when Mike put that truck in park, he had tears in his eyes.  And when the preacher man put a hand on his shoulder, spoke God-words to him, those tears spilled down and  his soul, wrecked and battered though it was, was towed up. Was hauled in for repair.


And the cab of a tow truck was transformed — became  a sanctuary  of sorts.


The mire and muck and bug guts of the broad windshield might as well have been stained glass.


The dusty footprints and crumpled gum wrappers of the floorboard rested on holy ground.


And Mike, who showed up that day to do a job, left with a  purpose.

This is one of a series of true stories highlighting people who have been touched by the life of Bane Beasley.  If you or someone you know was affected by Bane’s story and would like to share it with Sonya and Drason, please contact us at: banebow@gmail.com.